Nature Trail’s Tour Director and Tour Leader, Steve, has been hiking and touring around Australia since he was at school, university and participating with orienteering and bushwalking clubs.

Both hiking and touring the countryside have become Steve’s lifetime recreations, although somewhat on-and-off over the years due to his corporate finance career commitments.  Steve is a passionate conservationist and operates as a Conservation Consultant for The Habitat Advocate.

Steve’s keen motivation after his corporate career continues to be to regain his fitness and a healthy weight, which has been a key impetus for establishing Nature Trail.   Over the 20+ years of exploring the Blue Mountains and Central Tablelands, Steve has built up an extensive local knowledge of special Natural places of which he is happy to openly share with visitors. 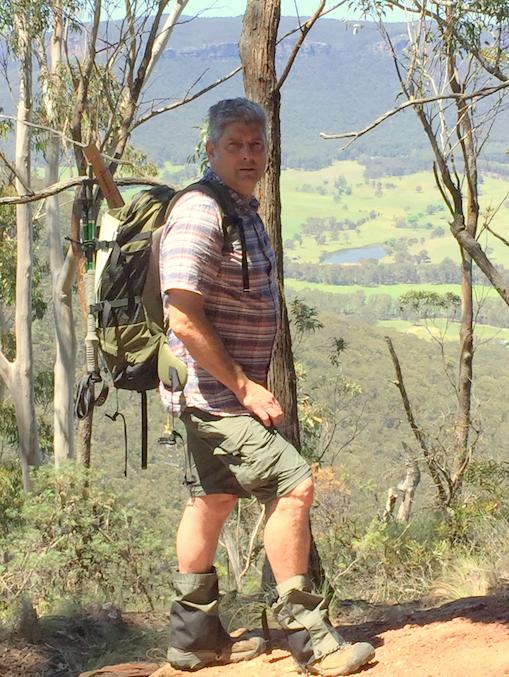 Steve has been hiking since he was 14, recalling his first trek being three days in Tasmania’s Cradle Mountain National Park with Camberwell Grammar School back in 1976.  He recollects that at the summit of Cradle Mountain in summer it snowed.

After HSC, throughout 1983 in what he calls his ‘formative grand tour of Australia’, as a backpacker Steve independently explored the entire continent of Australia finding work in each stopping off place from Melbourne, Brisbane, Proserpine, Townsville, Cairns, Darwin, Adelaide and later the coastline of WA, through the Kimberley and around Tasmania.

Steve recalls his early days practicing orienteering competing with the Nillumbik Emus Orienteering Club and was a foundation member of outdoor recreation university club ‘OUTFIT’ at what is now Victoria University and lead hikes to Wilsons Promontory and the The Grampians and white water kayaking down the Mitchell River.

Steve since a teen, participated in school cadets, volunteered a decade to surf life saving, trained in club orienteering, and was involved in club bushwalking including briefly with the Melbourne Bushwalkers, undertaking hikes in Victoria’s high country – Mount Baw Baw particularly.

In 1986 undertook independent travel to England and Europe, then flew to New Zealand to start learning to fly helicopters.  A year later, Steve was accepted into the Australian Army’s Royal Military College Duntroon to undertake officer training and was one of three accepted on an aviation cadetship.  However, Steve found the standard of basic infantry training to be poor and worse than his experience in school cadets, so he resigned five months into the 18 month course.

Upon discharge Steve diverted his focus to a maritime career and over the following three years obtained his Surf Bronze Medallion at Bondi Surf Bathers Life Saving Club, working on various vessels along the Far North Queensland coast, eventually obtaining his Commercial Coxswain Certificate in Darwin.

During that time Steve did not abandon his passion for flying, obtaining his unrestricted fixed wing license at Tamworth and then his commercial helicopter pilot license in The Kimberley and doing charter flights in the Top End.

Steve’s employment background is eclectic.  Steve has worked in hospitality (food, beverage and hotels), in catering and in travel and tourism around Australia.  Steve worked as a tour guide driving around The Kimberley, as a coxswain on Port Phillip Bay, the Yarra, The Whitsundays and Far North Queensland.

During the recession in 1993 Steve left his home town of Melbourne for good and relocated to Sydney embarking on a corporate career over the next twenty years in management accounting,  business analysis and systems accounting, obtaining a degree in management in 2004 from Monash University.

After years of driving from Sydney at weekends to hike in the Blue Mountains, in 2001 Steve and his wife Sue decided to tree-change and settle in Katoomba, which they both consider to be the bushwalking heritage heart of Australia. 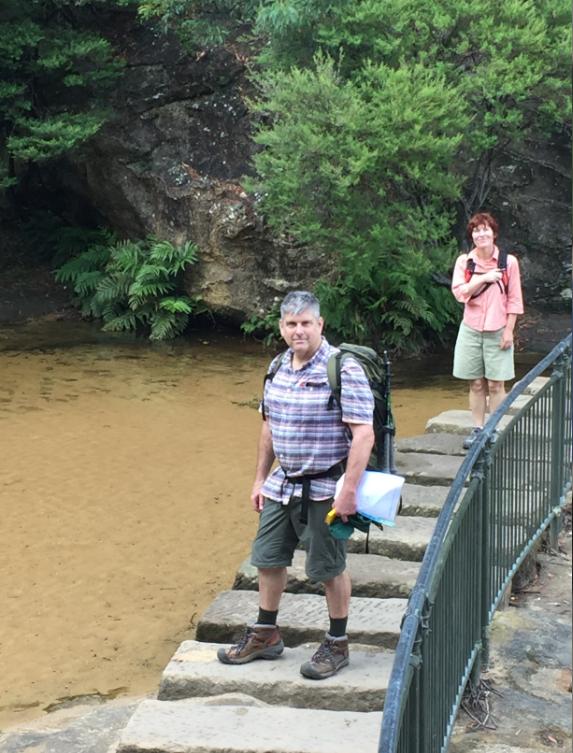 In 2003 Steve attaining a business management degree from Monash University.  During his studies, Steve worked hands-on as a truck driver, forklift driver, and logistics manager.

Steve’s hiking experience spans Australia, from the local and distance reaches of the vast Blue Mountains region to Victoria’s high country, the Grampians, Tasmania, various hikes through the Great Divide – from Dargo, Koscuisko, Dorrigo to the Atherton Tablelands and the wild Kimberley.

Steve remains passionate about The Mountains – surrounded by Nature, its cooler high altitude climate, its ecology, and exploring its vast wilderness.  Steve is keen to share his knowledge and insights with visitors. 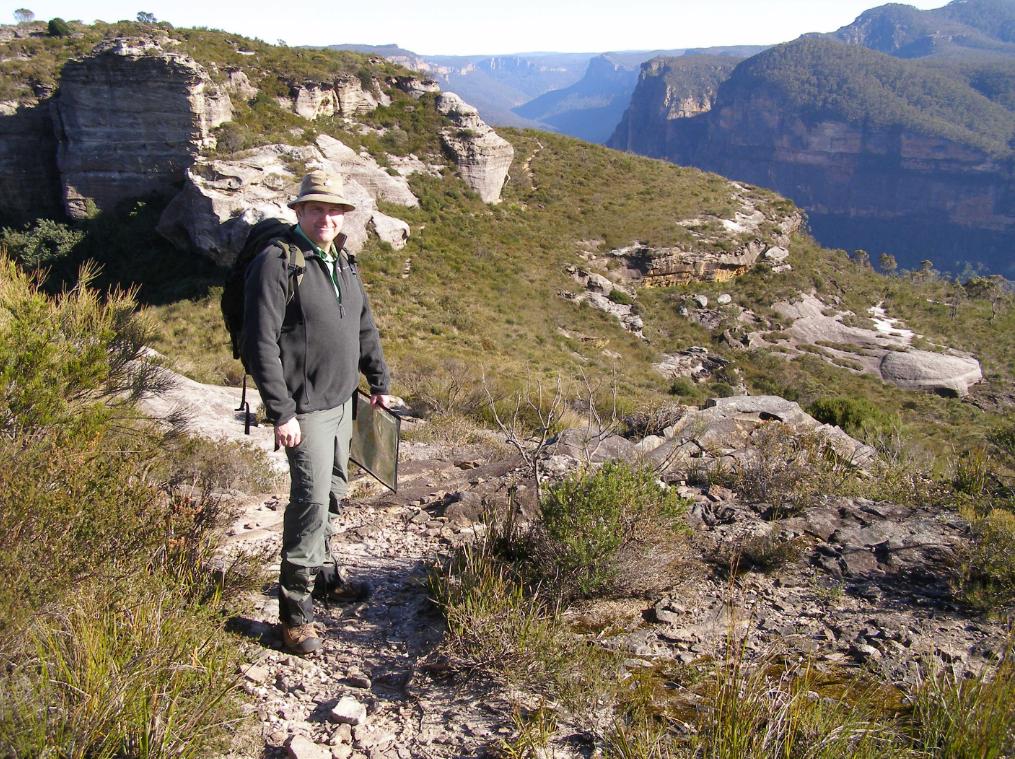 With each hiking tour, Steve has thoroughly reconnoitred, researched, evaluated the route for features and risks, and practiced-hiked the tracks with ‘Friends of Nature Trail’.  This provides Steve with confidence that guests of Nature Trail are assured of receiving a premier Nature experience. 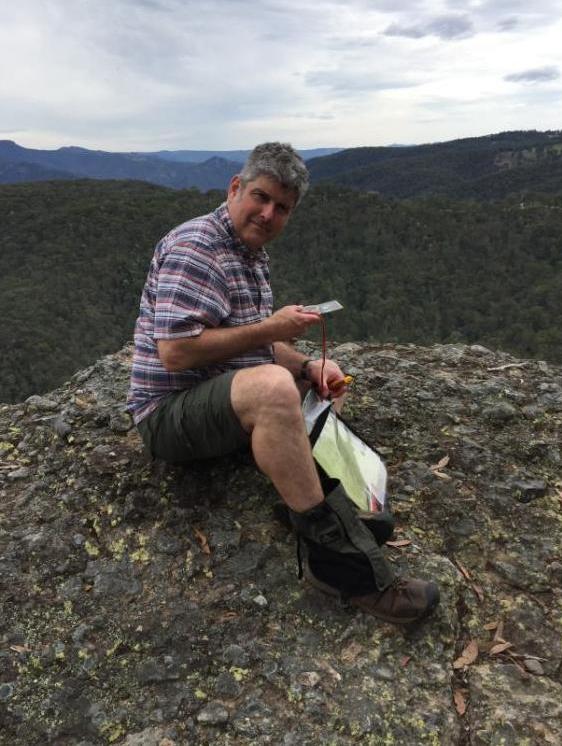 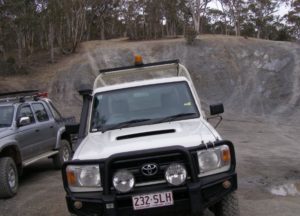 Steve holds numerous relevant local qualifications enabling him to advanced his skills and professionalism in the great outdoors: 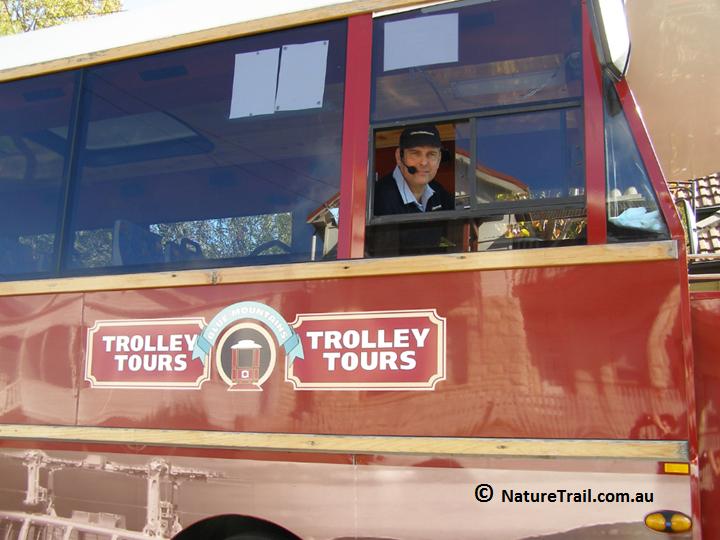 Steve’s bushwalking hobby has become a business venture.  He decided to become a professional hiking tour guide so he could share his passion for the Blue Mountains and maintain his health and fitness, after a sedentary career in corporate finance.

In 2017, Nature Trail launched, publishing its website and embarking on a series of bushwalk recces and practice trips with close friends so as to build a suite of quality tour offerings.

Nature Trail continues on the journey of professional development towards commercial launch anticipated in the Spring of 2018. 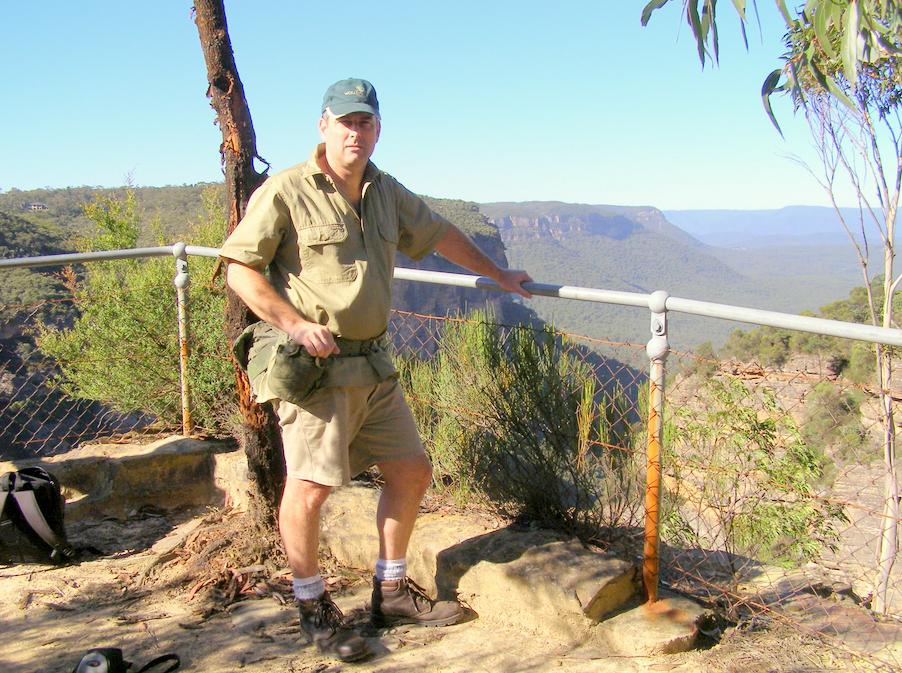 Steve has lived in Katoomba in the Blue Mountains with his wife since 2001.   Together they have explored most of the many hiking tracks, hills, valleys, back roads and four wheel drive tracks throughout the vast Blue Mountains region and beyond.  This has built up an extensive local knowledge base of the many wonderful features and range of opportunities to explore.

Steve undertakes detailed planning and regular reconnoiters and practice trips of tours offered and is always inquisitive about learning new routes and locations. 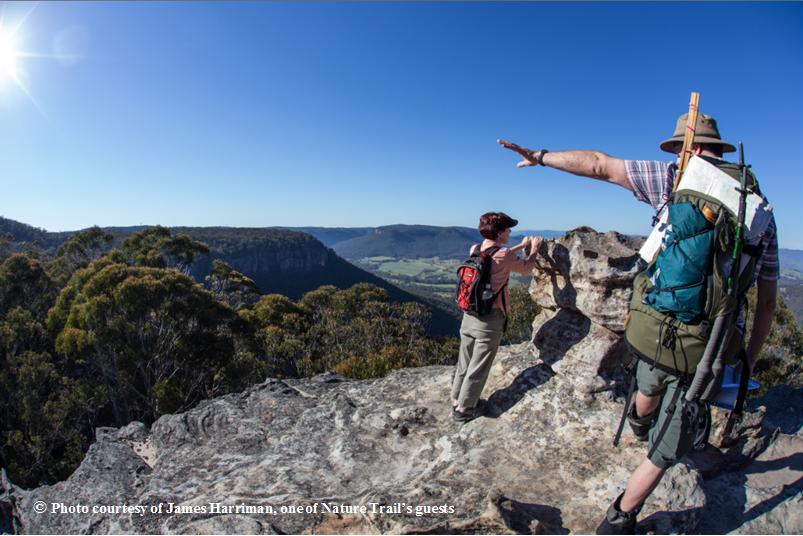 A passionate conservationist, Steve is keen to showcase the wild beauty offered by this World Heritage expansive natural region.   Within minutes on tour Steve will take you away from the crowds off the beaten track to non-touristy special places. 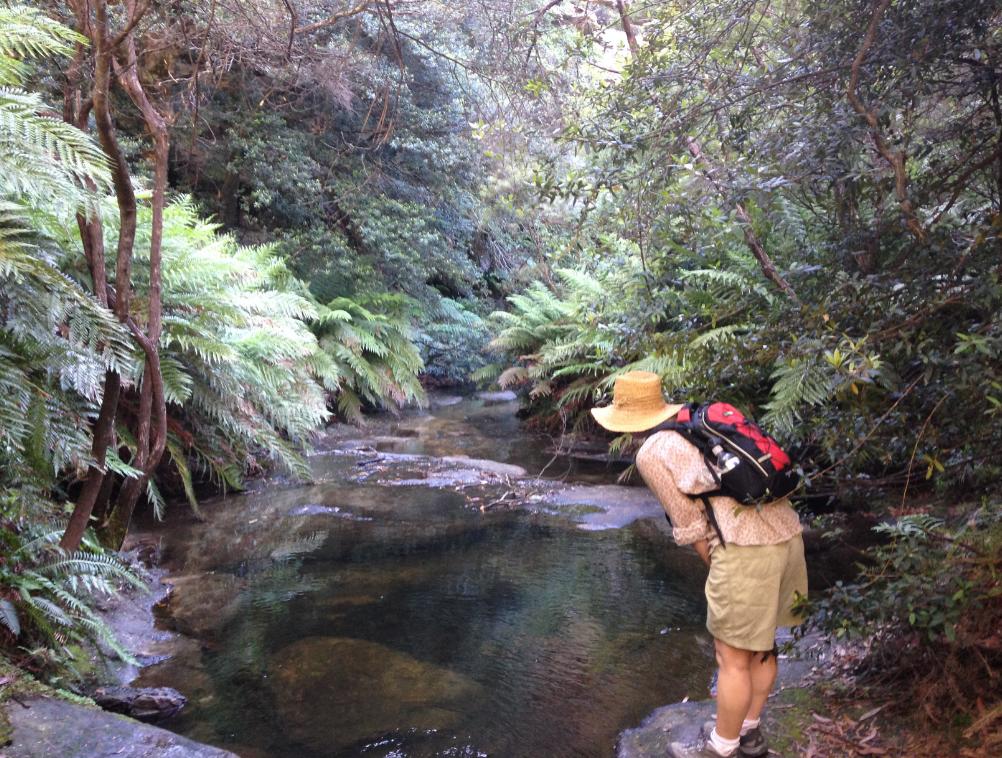 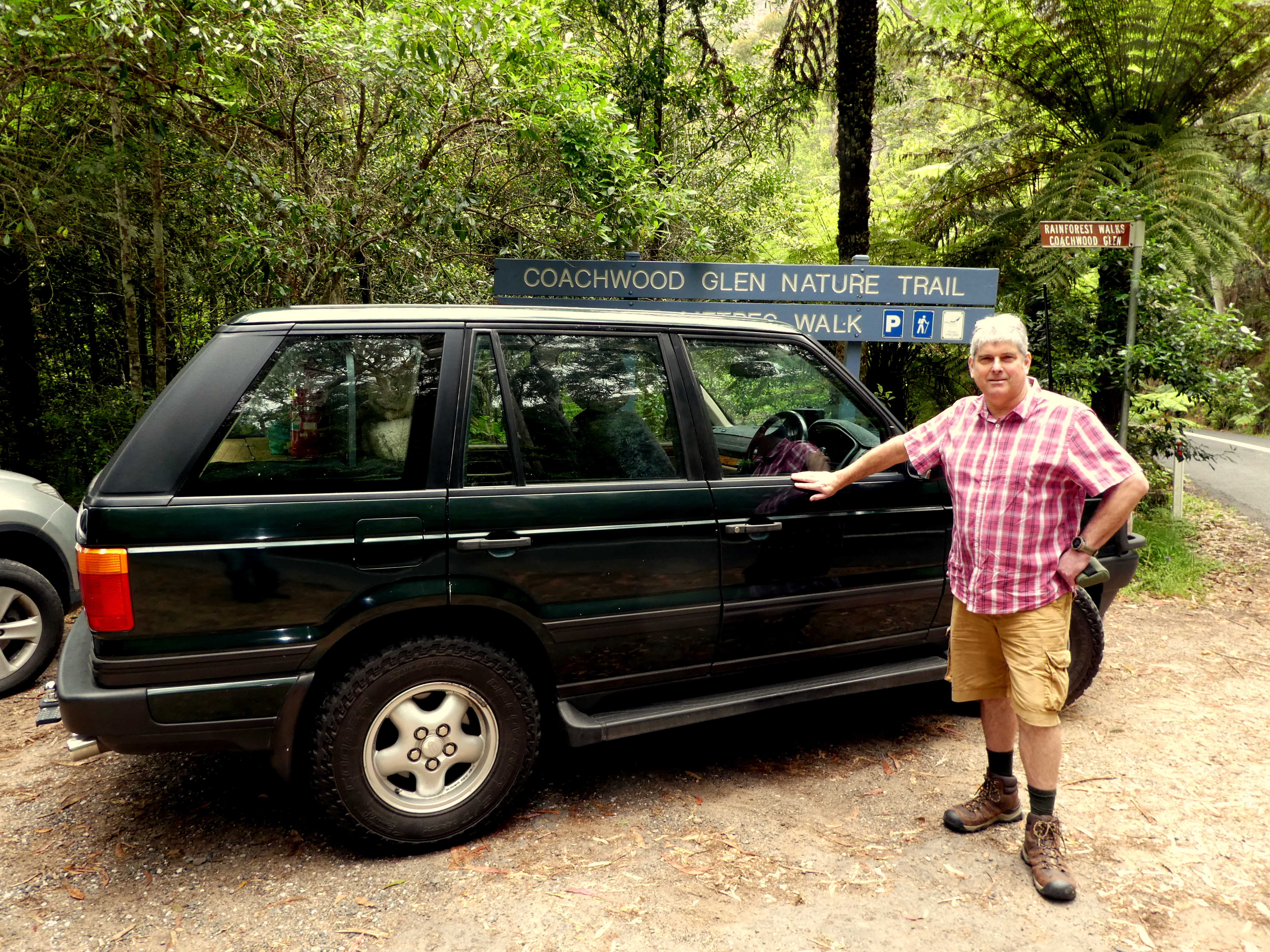 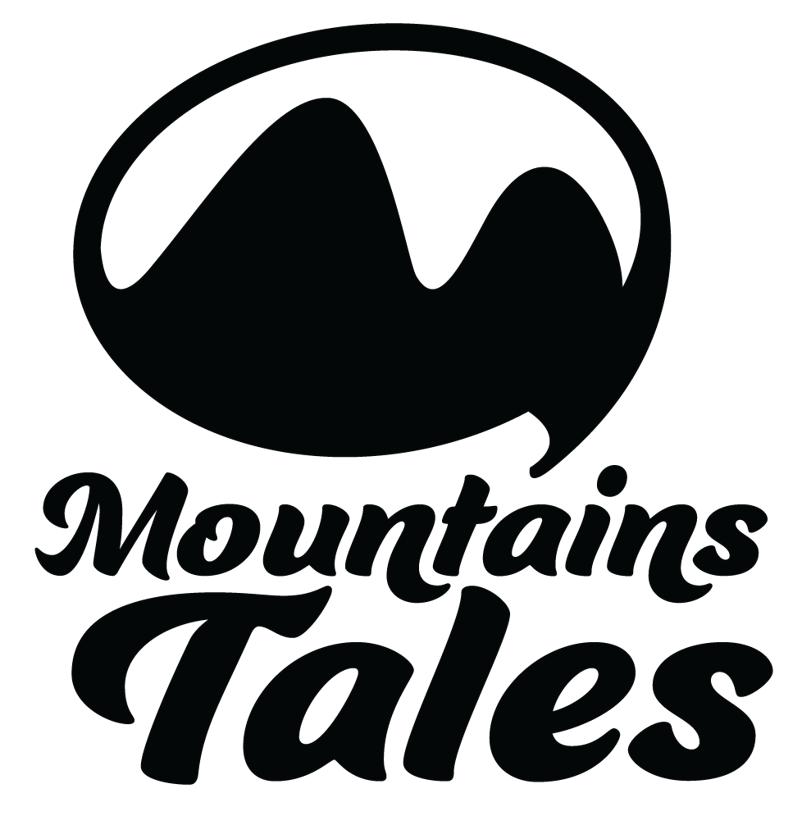 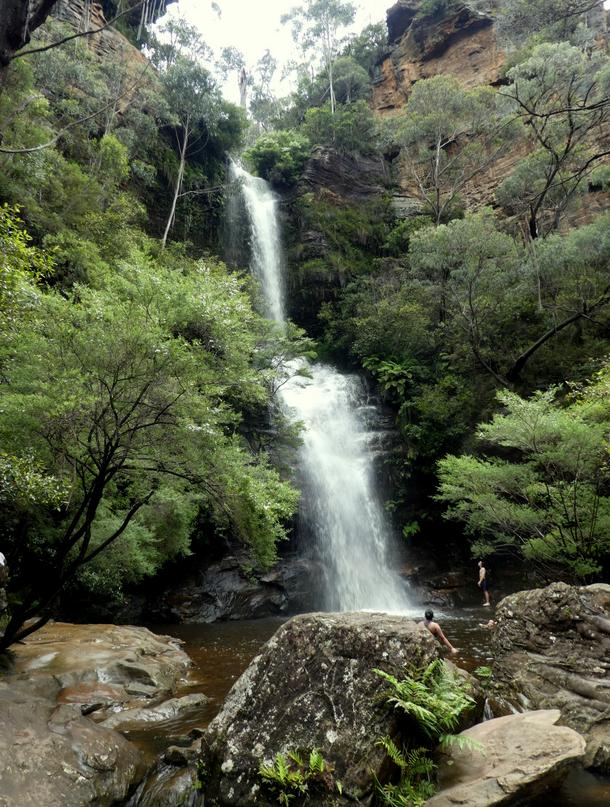 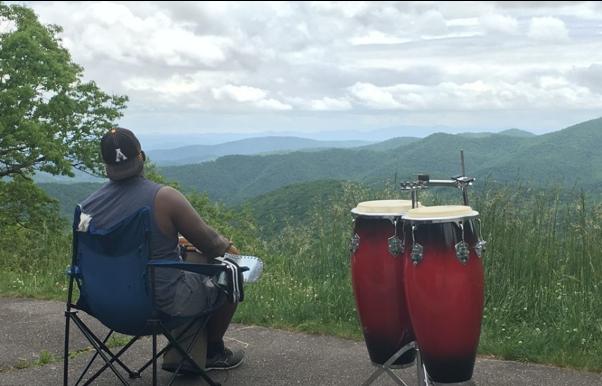 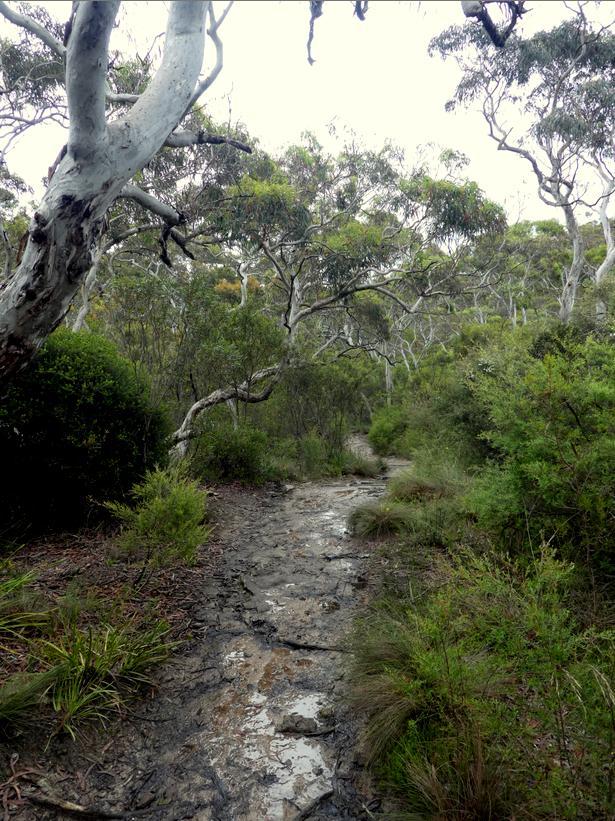